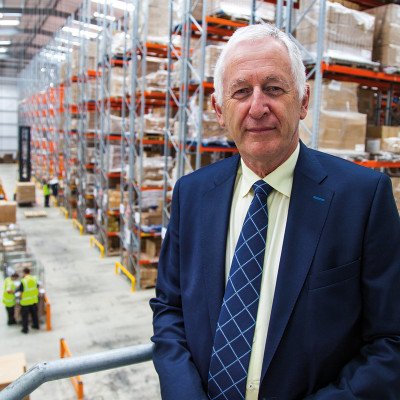 Paul Murray has been appointed a member of the Order of the British Empire (MBE) in the Queen’s Birthday Honours List for services to charity and the community in Winchester.

Paul is the Chairman of the eponymous company Paul Murray PLC, which is a supplier of health, beauty and nursery products to the retail trade in the United Kingdom and Ireland. He has worked in the company for 52 years having started as an 18 year old sales representative in 1966. He built the company with his father and was the Managing Director of this successful business from the age of 25, a period of 44 years before becoming the Chairman at the start of this year. The company currently employs 80 people and is based in Southampton.

Paul Murray has also dedicated himself to supporting a range of community based organizations, all in an unpaid and voluntary capacity, with the aim to make a real difference to those who might need help and support, as well as to enrich lives through enhancing and improving community facilities.

Paul Murray devoted over 20 years to The Rose Road Association, a charity providing care and support for the most severely disabled young people in Hampshire and surrounding counties. Whilst he was Chairman of the Winchester Fundraising Group and then the Southampton and Winchester regional fundraising group he lead his committee in raising more than £300,000 over 5 years. This money went towards the build cost of the ´Bradbury Centre´ for children with profound and multiple disabilities. This building has made a huge difference to the lives of many hundreds of families, and provides a place of care, support and also enrichment and creativity. The building was opened by HRH Prince Edward, The Earl of Wessex and he re-visited for the Diamond Jubilee in 2012. Paul then became Chairman of the entire Rose Road fundraising committee where he raised £150,000 that helped with the running costs of the charity. More recently in 2015 to 2016 as a fundraising committee member Paul was involved in raising a further £160,000 which funded the refurbishment of the Bradbury Centre. Although in full time employment he volunteered his spare time to the charity, organizing fundraising events such as theatre nights, sportsmen dinners, horse racing nights, numerous gala balls as well as helping with a polo event attended by HRH Prince Charles, Prince of Wales.. Paul continues to be an ambassador for the charity.

Paul Murray has also impacted the local community in other important ways. From 2000 to 2003 he was Chairman of the building committee for the Compton and Shawford Memorial Pavilion where he masterminded the building and fundraising of this £400,000 project, which now serves the football, cricket and tennis sports in the area as well as providing a focal point for the local community.
And in 2017 he became a trustee of Trinity Winchester, which is a charity that deals with homelessness and vulnerability through specialist practical and emotional support and proactive prevention. It offers hope and help to people who are vulnerable to the effects of homelessness, addiction, physical and mental ill health, poverty, social isolation and domestic abuse. He is currently chairing the committee charged with raising the £1.5 million required to build accommodation for homeless persons in Winchester.

He has also been passionately involved in the running of local football clubs. Whilst unpaid chairman of Eastleigh Football Club (2006-2012), Paul turned it from an unincorporated committee run club into a limited company, playing within the National South League. And from 2013 until this year he was the Chairman of Winchester City FC which had fallen on hard times when he joined but he has since been the driving force in turning it into a successful Southern League club, bringing great pleasure and enthusiasm to the City.

These factors combined have seen him become an admired and hugely respected pillar of the community. He has a real passion for helping others and has given his time willingly to make a real difference for so many people. Paul is married with three children and eight grandchildren.

This website uses cookies to give you a better user experience. By clicking “Accept”, with the tick box enabled, you agree to the storing of cookies on your device to enhance site navigation, analyse site usage, and assist in our marketing efforts. Please remember that if you turn cookies off, certain features of this website may not be available to you. Find out more about how we use cookies. https://www.murrayshealthandbeauty.com/terms-and-conditions/cookie-statement
Accept